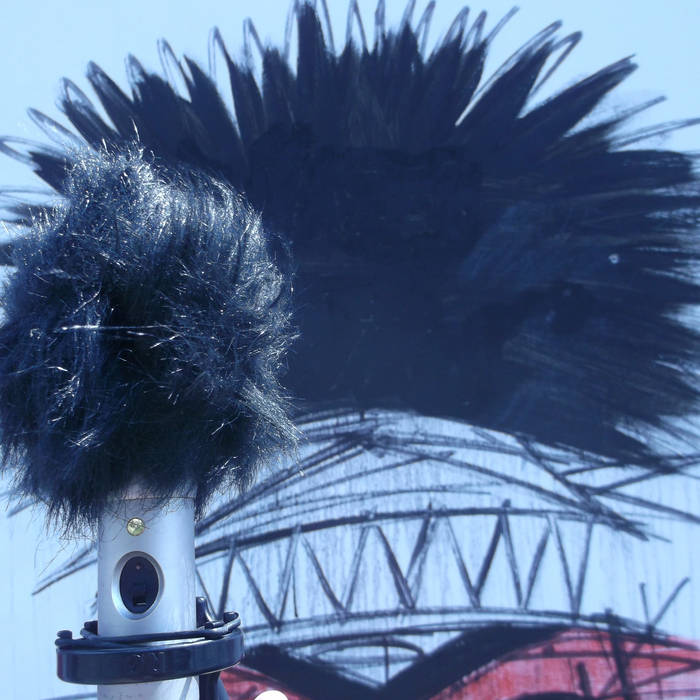 Sometimes it's kind of difficult for me to decide where to situate myself when recording. Here in Leicester Square there were two different construction works going on which I wanted to be evenly spaced within the stereo field, but if you've ever been to Leicester Square you'll know that there's a large fountain in the middle which - no matter where I positioned my microphones - was unavoidably going to be a central part of the recording (both figuratively and literally). Despite being in a pedestrianised area relatively early in the morning (for a Saturday at least), the many starlings and pigeons struggle to be heard over the white noise of the fountain, the loud banging from the workers, and the incessant drone of urbanity.

I passed through this square on my way home after I was done recording; it was a lot busier and more interesting to listen to later in the day: The fountain had started spurting jets of water in rhythmic patterns for children to play in, there were a lot more people around doing interesting things like breakdancing and tai chi, and the nearby Swiss glockenspiel installation was going off. I was tempted to get my kit out once more, but I was too tired and would have had to wait another 2 hours if I wanted to catch the glockenspiels again. But this anecdote only proves the point I made in the last episode about the Treachery of Images; sure, I had made a recording of Leicester Square but it's not an accuracte depiction by any means. Our world is constantly in flux, rendering "faithful representaion" a fool's errand.

I went from one public square to another - Leicester to Parliament. I did happen to pass through Trafalgar Square in between the two, but I've already recorded there so I didn't really think it was worth bothering with again (which I know kind of goes against what I was just saying but I also have to consider my audience; eight episodes in is too early to start recycling material). If you want to hear what Trafalgar Square sounds like check out Episode 4 of this podcast.

Parliament Square is just as noisy, but you can hear the openness to it. You're surrounded by motor traffic, but it's slow moving and heard from a tolerable distance. Acoustically, too, the area is a lot less reverberant, with only louder distant sounds having any kind of echo. The passers-by are also spread out, adding to the feeling of spaciousness even though there were way more of them than at Leicester Square. Well, eventually anyway; I must have come at just the right time as I got to witness a gradual transition from desolation to prosperity over a period of maybe half an hour. Tourists seem to get up at roughly the same time, regardless of variances in jetlag.

It's a shame that Big Ben isn't being tolled nowadays. A lot of people describe it as London's most iconic sound, so it's annoying that I couldn't cover it on this show. That said, I've heard arguments against the idea; For example, Peter Cusack - who I studied under - once pointed out that a recording made in Parliament Square of Big Ben chiming is often unrecognisable. He explains it in one presentation at Duke University by proposing that:

"Many people know that sound through listening to radio or TV, not because they've heard it. That applies to most Londoners and most British people as well, because the noise of London is now so loud you need to be within 500m of it to actually hear it... But, in fact, the real sound of... Big Ben is rather unfamiliar, even to Londoners."

Basically, we all know the melody (I recorded a version of it in the very first episode of this podcast, in fact) but we're used to hearing it with such clarity that the real life sound of it - amidst all the other environmental noises - doesn't meet our expectations (the reason we're used to hearing it so clearly, by the way, is because they have microphones positioned inside the bell tower. Yes, the start of BBC News is usually a live feed, and not prerecorded).

On to the main event of this episode now: The changing of the guards at Buckingham Palace goes on for quite a while - maybe an hour or so. I didn't record the whole thing, only the first two parades, keeping my microphone still to emphasise the passing nature of the performances; it's rare that music has a directionality.

I had my more conspicuous Rode NT4 out, and I wasn't trying to hide it or anything for a few reasons, even though there were hundreds of people around. First, I figured that everyone would understand what I was doing and what I was there to record; noone seemed bothered by it, at least. Secondly, people would be watching the ceremony - facing away from me - so I wouldn't be noticed much anyway (although I did get a couple stares). And thirdly, I guess I had this perverse, cynical hope that maybe one of the many police officers would spot me and come over to make sure I'm not doing something dodgy. It's happened to me before and it could have made for some interesting material, but alas; I think they were too busy making sure people didn't run out into the road and stayed where they were meant to. The crowds are very tightly controlled during the changing of the guards, with good reason.

You can now hear a second consequential procession, one that I wasn't expecting: That of tourists pushing through the crowd trying to keep up with the parade and not miss anything. This American family stayed next to me for the remainder of my recording, and you can hear their conversation in quite some detail, something that I might feel uncomfortable with were I using my discrete microphones. But in this case I had my microphone out before they arrived: They saw it, they knew what I was doing, and I can only assume they didn't care that I was recording them. Maybe they didn't realise just how audible they were to me given that my microphone was pointed away from them, but either way I feel that sufficient warning had been provided.

I hope you enjoyed the 'Buddies' episode with my friend Neil; I certainly enjoyed making it. If you live in the greater London area and like to go out recording sounds every once in a while I love meeting the people who share this passion of mine so please don't hesitate to get in touch. I don't care how skilled you are or how seriously you take it, it's just nice to spend time with like-minded people and chat about sounds and shit. Plus, I get some material for this show where I don't have to write and record a script - the part I enjoy the least.

Perhaps my conversations with Neil has made me more sensitive to modulation in music: The music is going from left to right, but it also becomes clearer and then more muffled again, which I think is quite interesting to listen to. It's hard to explain how a quality so seemingly trivial is interesting to me - something I struggle with every episode of this show - but listening back to this recording I was reminded of something John Cage once explained in an interview, a sentiment I relate to immensely. He said:

"When I hear what we call music, it seems to me that someone is talking. And talking about his feelings or about his ideas, of relationships. But when I hear traffic, the sound of traffic here on sixth avenue for instance, I don’t have the feeling that anyone is talking, I have the feeling that a sound is acting, and I love the activity of sound. What it does, is it gets louder and quieter, and it gets higher and lower. And it gets longer and shorter. I’m completely satisfied with that, I don’t need sound to talk to me."

As the marching band passes, behind them are the other soldiers (non-musical ones I suppose, or perhaps they're the actual guards who are participating in the change?) and you can hear their "leader"(?) barking the drill commands. He's not just shouting, he's shouting in a particular way; he's almost screeching, and whenever I've heard those commands they've been similarly delivered - in a way that is not only grating but also counterintuitively quiet. Seems to be an aesthetic decision rooted in tradition rather than a practical consideration.

So like I said, I didn't record the entire ceremony - by this point I'd had enough: I was boiling hot, and thirsty, and really hungry so I decided to leave and there was only one way out. Imagine hundreds of people trying to use a single pedestrian crossing - a normal sized one mind, nothing special that might accomodate the restless hordes - with two police officers actually enforcing when you can and can not cross. I just thought it was so funny how they had to keep barking the same orders over and over again to tourists who don't understand or just flat out ignore them. It was chaos. The longer I watched the funnier I found it, and then eventually the music started back up again which made the whole situation all the more comedic to me.

Aside from the humour, I also enjoyed listening to the rhythm of this spot: A series of beeps precedes a rush of busyness which then crossfades into a relative quietude with a duet from the two officers, and then suddenly it will all start again. It's also interesting to listen to the voices of the police, especially the male officer: You can clearly hear the exhasperation in his voice and - sure, the crowds are nowhere near as loud as the marching band - but he yells in a way that is both clearer and more intelligible than the shrieks heard before. He really knows how to carry his voice in a way that seems quite easy and comfortable for him. He'd make a great performer.