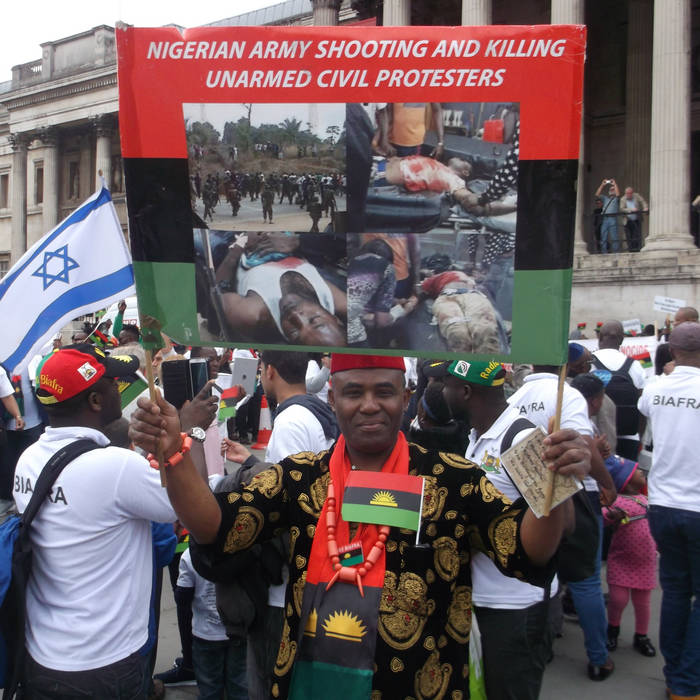 Either side of me - equidistant from where I stand - are two water fountains. Kind of makes this sound like a cassette recording, but it's not. In the distance there's a political demonstration - more on that later - and to the right of them a busker plays a hang drum. All around there is a murmer of passers-by and road traffic. The only thing to interrupt this noisy texture of a soundscape is the intermittent whistle from a security guard telling people to not climb on the lion statues or swim in the fountains. In case you still can't tell, this is Trafalgar Square.
A youtuber I like called CGP Grey described visiting this place for the first time in a while in his podcast with Brady Haran, and his observations are spot-on; I absolutely agree with everything he says and couldn't put it better myself, so I'm just going to paraphrase him here:

"Trafalgar Square now has little signs everywhere that are all about telling you what you can't do. If you ever see olden days footage of Trafalgar Square there are probably three things that you're going to identify as the fun things in Trafalgar: Number one, enormous flocks of pigeons everywhere. Now, years ago they got rid of the pigeons. The other two things were people playing in the fountains and people climbing on the lions. But now in Trafalgar Square there are signs everywhere telling you "you're not allowed in the fountains, and you're not allowed on the lions" and there's a security guy who was telling people to get off the lions at Trafalgar Square. This place is now kind of awful because all of the things that were interesting you're not supposed to do anymore. It's actually just this barren area of concrete that has no real interest."

Grey also laments the abundance of what he describes as "cheap, low-effort buskers", and comments that he saw three simultaneous floating Yodas. Maybe they're a fixture as I also witnessed no less than three while I was there. I also tend to see several chalk artists whenever I visit, and at least one company is handing out free samples. The biggest attention-grabber however is always whatever political demonstration is occuring that day, Trafalgar Square's raison d'etre.
These people are Biafrans, Biafra being an unrecognised state in Nigeria. They were here to celebrate 'Biafra's Heroes Day' which honours those who lost their lives in the civil war from 1967 to 1970, and to further promote seccession and independence from Nigeria who, according to their literature, continue to murder Biafrans in an act of genocide. The Biafrans believe the British government should take some responsibility due to their involvment in arming and training the Nigerian military. As can be expected from a rally, there were a lot of speeches made throughout the day, but I'd rather this show avoid the explicitly political so I recorded some songs they sang (which I also think are a lot more interesting to listen to).

What I enjoy about this recording is the stark contrast in timbral aesthetics: This heavily amplified, even distorted voice gives me a claustrophobic feeling, but the responding chorus has a fidelity and a spaciousness to it. There's also something about how the minor key of the hang drum pairs with the singing and shouting - I don't know, maybe it's just me but there's a dreadful feeling of uneasiness here, even though the songs they're singing are quite jubilant. Anyway, I usually try to not go too long without commentary for this project, but due to the musical nature of this recording I feel like I can afford to shut up for a while without risk of boring you. Also, these people want to be heard, I feel like I should oblige them.

I've had those melodies stuck in my head for days now; it's annoying that I can't sing most of it.

So this next part's going to be a bit different: This is a recording made with something called a contact microphone. I'll go into what those are in a minute, but first I'll tell you what you're listening to. Even with hundreds of people around, Trafalgar Square as a physical place is very quiet. My contact mics were only picking up the occasional dull thuds, so I wandered down the Thames - I know, I recorded along the river last episode and even called it cliche, but I needed an environment with some movement to it. This is going to be hard to explain - okay, so this is at a boat called the HQS Wellington. There's a ramp down from the embankment to a floating platform, which then has stairs up to the Wellington. The stairs are sturdily attached to the boat, but they only rest on the platform on some wheels, which allows the two areas on either side of the staircase to move independently of one another. The staircase rolls around the platform a significant amount, going left and right and forward and backword by several meters. The effects of that movement is the erratic and dynamic sound you can hear now.
The reason this recording might sound... different is because contact microphones record sound from vibrations through solid surfaces as opposed to through the air. They're really cheap and easy to make if you know how to strip wires and solder, I'll post a link to a guide in the description. I've actually bought a professionally made one for this, even though homemade ones are just as good in regards to sound quality. Maybe I'm just shit, but I've found the ones I've made myself to be too fragile and it's not long before I have to resolder a connection or something; I wanted something that would last longer and could take a bit more of a beating. Plus, this one from Cold Gold Audio has crocodile clips attached which makes connecting the microphones to certain surfaces a lot quicker - you don't necessarily have to mess around with blutac or tape or whatever. It also has gold glitter on the backs of the transducers which looks very nice, if that's of any significance.
This was actually the first time I've used a contact microphone in years. They fell out of favour with me because I don't like how you don't know what results you'll get until you start recording. I like to find a sound that is interesting to listen to and then start recording, not the other way around. Most importantly though, I can't help but hear a contact mic recording as a contact mic recording. You might not agree with this analogy, but it's a bit like a black and white photo: It doesn't matter the subject, I see it as a black and white photo of that thing - the medium diminishes the content. That said, I do enjoy the results (this particular recording reminds me a lot of the free improvisation and onkyo music I listen to), it's just not my style as a recordist I suppose. However, I would recommend them to anyone getting into field recording as they're a super cheap addition to a growing arsenal, and they literally change your perspective in regards to how you listen to the world around you. Plus, you don't have to deal with challenges like wind or unwanted background noise, which is handy for beginners.

Right, I don't have anything else to say, so time for the obligatory fadeout. 'Til next time.

Okay, so quick announcement: I've started uploading this podcast to Youtube (link in the description) and have also submitted it to iTunes but am currently awaiting approval (I'll be sure to tell you more about that when it's up). If either of those avenues are most convenient for you to stay up to date then have at it, or if there's some other service that is preferable to you then let me know and I'll check it out.