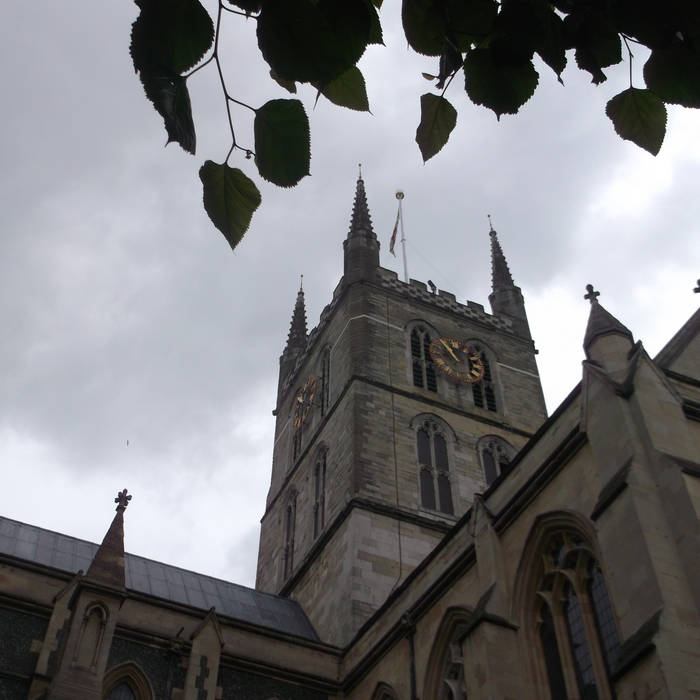 I think it's fair to say that this podcast started very accessibly with the first episode being entirely musical with a lot of different recordings. But as the project has continued I've been getting a little more 'hadcore' with each episode. The sounds you've heard have been less musical overall and I've been using fewer recordings in each episode, too. Well, this episode may be a bit of a test for my listeners because this episode is centered around just a single 17 minute recording... of bells.

To make matters worse for you it's also a low-fidelity recording. I've incidentally found myself in possession of a piece of old kit that I've been eager to try out: So, I had recently started chatting online to a fellow recordist called Neil who was keen to meet with other like-minded people in London. Upon my reaching out, he told me that his housemate was just the day before saying that the two of us should meet. Turns out this guy lives with an old friend of mine from my hometown. Small world.

Neil also happened to be selling his then current recorder, an outdated piece of tech called the Fostex FR-2LE which came out over 10 years ago. It doesn't work with SD cards like recorders do now but instead uses a solid-state flash drive, so it's still digital but its from a time when affordable technology was rapidly advancing and new products were quickly made obsolete. What I like about this recorder is its aesthetics: The buttons and dials feel more mechanical and tactile, and it looks like it should house a cassette tape - the industrial design is very much influenced by the then only recent walkman age. I plan on testing how good it is with my usual microphones but first I wanted to hear how it sounded by itself, so this recording was made using the Fostex's on-board microphones. They're not very good, and visually they appear as just two little holes - one on either side - very much the same style that you would find on your mobile phone and I imagine a similar quality. There's also no kind of wind protection available for these mics. But, eh, I don't really care, maybe it's a cliche thing to say but I like retro tech for the personality it has.

The low fidelity of this recording is actually kind of appropriate on a personal level: This was recorded on Father's Day, and my father's geeky passion is perhaps just as unusual as my passion for sound - he writes a blog about how failure is good and how we should embrace it. If that intrigues you, you can find his blog at brucelynnblog.wordpress.com. At the time of writing this script, his latest post was coincidentally about this podcast, so I suppose I'm returning the favour. Happy father's day, Dad.

Neil was real fun to meet up with; we immediately hit it off and quickly became friends over a couple drinks. It's nice to hang out with like-minded people; field recording is quite a niche interest so I don't get to talk about it in depth much. I suppose this podcast was meant to be an outlet for that conversation that I long for, but being face-to-face with someone and having a couple pints is always going to be much more enjoyable and perhaps a little less narcissistic. It reminded me of what I miss about university: I studied sound art at the London College of Communication, where I was surrounded by people who had similar interests and passions and ideas as myself. I remember a thought I had on the last night that we all went out celebrating after our last ever crit: We had seen each other practically every day for the last three years, and we were still talking about sound and music right to the very end - that conversation never got boring, we never ran out of things to say. I plan to meet up with Neil more, but also if you - dear listener - live in London as well then get in touch maybe we could have a pint together too. Neil has only recently begun experimenting with field recording, but you can hear his work with modular synthesisers at homodular.bandcamp.com. I'll put a link in the description.
Speaking of links in descriptions: This podcast is now available on itunes! Just search in the podcast section for Field Trips Mola and it should show up. However, as far as I'm aware itunes does not facilitate written descriptions which is kind of annoying. I like to link to various websites related to what I talk about which won't be seen by listeners using itunes. This is why I've started saying them out loud. For example: *clear throat*

"If you would like to hear a sans-commentary version of this or any other episode, you can find it at mola-recordings.bandcamp.com where there is an album called Field Trips. The recordings are free to download, but you can also choose to leave a donation to help support the show if you would like."
So I'm sorry everyone listening on soundcloud but that is something that will be said in every episode from now on because I think a lot of people are missing it.

From itunes to youtube: I mentioned last episode that I'm going to put this show up on youtube in order to transcribe it with subtitles - yeah, fuck that. After doing the first four episodes I've realised it's just not worth it; it's a lot of time and effort to add subtitles (even with youtube's voice recognition technology) and hardly anyone is listening to this on that platform, anyway. I'm just going to have to try harder to speak clearly and distinctly, and I will also be more liberal with my use of ducking and filters so that I am as intelligible as possible. I still would recommend listening to this show on anything but your laptops shitty built-in speakers.

Anyway, let's get to these bells. This is the actual change ringing part - the main event, as it were - which happens twice in half an hour at Southwark Cathedral. You would have heard at the beginning a simple repetition of the first 3 notes of the major scale, just hammered over and over again. That's actually my favourite part I think; the way they toll those same three bells with such rapid regularity causes a drone to emerge. It's a really thick, warm drone that's plenty loud, but you still have to shift your aural focus to hear it over the clangs. Once you do though, you find it much more captivating than the more prominent arpeggio that causes it (or I did at least). I would encourage you to rewind and listen to that part again if you missed it.

Bells are used culturally all over the world, but the fundamental attitudes towards their purpose can vary. Change ringing is a dinstinctly English example of Christian sound culture, and I find it kind of self-defeating: Here in the West we worked so hard to tune our bells mathematically to resonate according to our idea of musical tonality, which then meant we could use several of them to make a kind of music with, and then we even developed this entirely unique compositional practice dedicated to making the ringing of bells interesting and varied, and yet after only a short time this practice - contrary to its name - becomes entirely monotonous. I mean it really just keeps going to the point of tedium. Compare that to the evening bell tolled at buddhist temples in Japan: the bell at Mii-Dera, for example - which I've had the privilege to record - is so rich in overtones it's practically a minor third. The bell is at ground level rather than raised up high above you, so you can hear other sounds that are part of the mechanics of ringing it. Sure, this means you can't hear it from as far away, but when standing nearby its resonance is so deep it becomes a very physical sensation. It's also short in duration - only a couple minutes - which lets it stand as an event rather than becoming background noise. This kind of relates to what I mentioned earlier regarding the 'embrace of failure': Western religious sound culture strove for the ideal and the transcendental - what's supposed to be "divine music from the heavens" remains tedious and ignorable, whereas in the East they accepted imperfections and treated the whole idea with an air of humility, somehow resulting in a more compelling listening experience. Now that's Zen.

After this part there's some intermittent tolling before the change ringing continues; I don't really understand what's happening there, perhaps someone with knowledge of bell ringing could let me know - I'll get to that later though. I managed to record almost the entire half-hour of these bells completely uninterrupted, but then in the last 5 minutes - as the change ringing stops and it becomes just a continuous tolling of a single bell, marking the hour and shouting out "Time for church! Service is about to start, get your ass over here - some guy comes comes up to me on a bicycle, sits down on the very same bench as me (rather than any of the others in the garden which are all empty), pulls his phone out and starts to have a very loud conversation that I can hear both sides of. This means that part of the recording is completely unuseable for ethical reasons. I was kind of pissed off at my luck - I find that last bit of the bell ringing quite emotive and powerful and I wanted you to hear it. A part of me was tempted to return in a weeks time to try again, but I imagine a whole half hour of lo-fi church bells would be pushing what few listeners I have a bit too far. Plus I would run out of things to say; I'm already struggling.

Here's the part I was talking about earlier. The change ringing has stopped and it's quarter to eleven. So, two bells: what does that mean? That to me does not signify quarter to anything, and it definitely doesn't represent the hour. Here it goes again. So is that meant to be three? No, it's four. Five. Six. What do the six bells signify there? Oh, a different bell now. Four. So two, then four, then a different four. Then back to the change ringing. What does that mean? Get it together, Catholics!