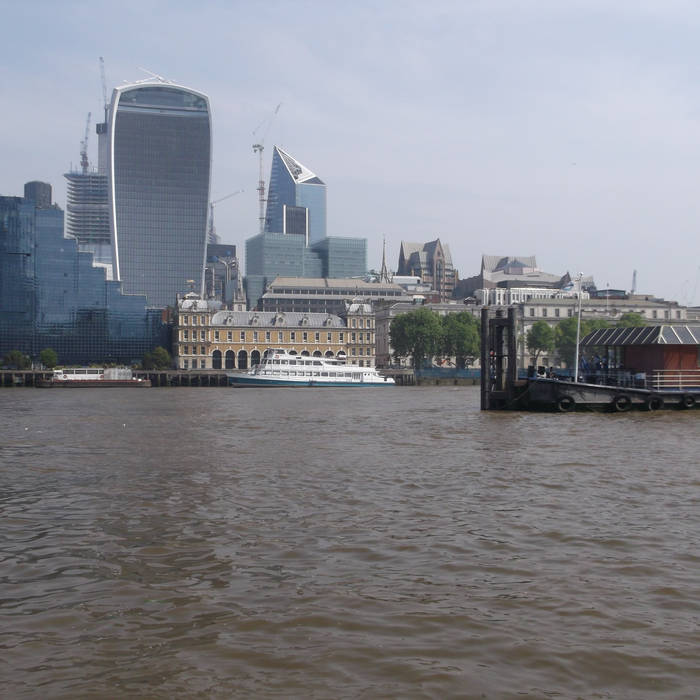 Rivers are really common as a subject in field recording - it's practically cliche. Sure, some recording artists dedicate entire projects to documenting rivers, such as Annea Lockwood's sound map series or Virgilio Oliveira's exhaustive recording of the Rio Douro. But even if a river isn't your focus, they just have a way of popping up. For example, my first album consists of 55 recordings of an old road in Japan, and 25 of those recordings - almost half - feature the sound of water in some way, a lot of those sounds being rivers.

I think there's a number of reasons for this: The first reason should be pretty obvious, they're just quite aesthetically pleasing to listen to - they're relaxing. The second reason is more technical; grainier sounds help to cover up the inevitable hissing noise that comes from the recording equipment itself, meaning a steady background noise ironically makes the recording sound clearer. The third reason relates to what I mentioned in the last episode regarding Bernie Krause's idea of the biophony, anthropophony, and geophony; there are some sporadic or intermittent examples of that third category like earthquakes, thunder, or volcanoes, but the only quotidian everyday instances of the geophony are wind and water. You can't actually record the wind - only its affects on the environment - and it's actually a massive pain in the ass to recordists for reasons I'll go into later. This leaves only water - whether it's a river or the ocean or rain, any part of the water cycle, really - as the only readily available geophonic subject. Lastly, I'd point out that civilisation is historically determined by access to water, and wildlife depends on water sources too. Basically, sound comes from movement which suggests life which needs water, so you can expect a field recordist to be at least near some water most of the time.

This particular recording was made near a pier for London's river bus service; I decided to go there to get closer to the boats. I stood at the edge of the platform - not anywhere that passengers were expected to be - and listened motionlessly for a while before the first boat pulled up.
Even though that brief exchange interrupted my recording, the fact that I was mistaken for some moron who doesn't know where to wait reaffirms that my go-to setup is completely inconspicuous.

I've been enjoying making this podcast, but I'm still getting to grips with it. I don't have any kind of background in creative writing, I'm not used to recording vocals (a task made much more difficult by the noisy neighbourhood I live in), and even the act of merely speaking clearly turned out to be more of an art than I ever anticipated. I haven't begun seriously promoting this project yet, but I've shared it with a few people online and received some questions, a couple of which I thought I'd address:

Someone, of course, asked me why I do this. Well, I think field recording for me is an obvious conclusion to other interests of mine: I enjoy hiking and wandering through places aimlessly, as I find it beneficial to be alone with my thoughts. I consider it a form of meditation I suppose; that concentrated attentive listening reminds me of what Zennists describe as a "single-pointedness" of the mind. I also grew up - as many do - with an intense passion for music, but my taste in music has slowly warped over the years. Now I just enjoy the act of listening, and I don't find the distinction of "music" or "not music" to be particularly relevant. That's my satori, I suppose. So, yeah, rambling + zen + weird music taste = field recording.

Someone else said they were struggling to place my accent. I was raised in England but my whole family is American and, since my parents were the ones who taught me how to talk, my voice and even sometimes my language is a weird hybrid of the two. People hear in voices what they're less used to, so to an English person I sound American, but if I go to America they all say I sound British. I imagine this duality in my upbringing contributed to my interest in field recording due to my always being a cultural outsider, but let's not get into that now.

I love the sound of the water pushing against those - uh, I don't know what they're called - hold on... Okay, they're call fenders apparently (those rubber things that hang off the sides of boats and docks); I love that squeaky sound that the fenders make as they're pushed by the water and rub against the sides of the pier. It sound's like dying cats but in a fun, playful way somehow.

I continued on down the Thames, and decided to go onto the nearby HMS Belfast. On the deck were two student volunteers chipping off the old paint from the gun turrets. I chatted to them for a bit before asking permission to record them, this changed their behaviour: One of them started really going at it - presumably trying to make more noise for me to record - while the other quietened down significantly. The guy who got louder was also the one who did pretty much all of the chatting too, so I think this contrast really is representative of two disparate personalities.

I come across this kind of difference when improvising with people. I remember one point in a video I made with a frequent collaborator and dear friend of mine Andrew Tuersley: A noisy train started to pass by us while we were banging away on a metal pipe. I shut up a little bit by simply hammering out a slow rhythm, hoping to emphasise the trains musical contribution, whereas Andy started banging louder and more erratically in a way that complimented the train's sonic character. It's the same thing really, whether you're listening or being listened to - the presence of a listener changes our relationship with our surroundings, thus changing how we act. This is why I tend to use my discrete setup, but in the case of recording these two volunteers I would have looked dodgy just standing and watching them work, anyway.

Besides these two, I didn't really find anything of interest on the ship. It's not like it's still a working, active vessel - it's very much just a museum. Like the butterfly house in the last episode, they play recordings to set an atmosphere and to try to recreate what the different rooms sounded like when they were still in use, and there were also several screens showing informative videos. But ultimately I feel like I'd have to dedicate an entire episode to cover this place, and even then I don't think it's all that interesting.

This particular stretch along the Thames is a massive tourist attraction, the entirety of it. You've got the icon of London that is Tower Bridge which also has exhibits, and that's next to this old part of town with cobblestone roads and everything like that, you've got City Hall, then - of course - the HMS Belfast.

I sat on the edge of the green between City Hall and Tower Bridge to capture some of the ambience; there's always loads of people passing by, speaking in all sorts of different languages and accents (especially on a beautiful day like today). Actually, my custom recording jacket is starting to get a bit too much for days like this; I guess I'm going to have to do the same thing again but with a short sleeve shirt for the summer months.

After a while I got up to walk across Tower Bridge.
A recordist called Ian Roars made a recording of this bridge, and it's one of the best recordings I've ever heard. Specifically, he recorded its internal mechanisms as the bridge was opening to let a ship pass. The results are so unbelievably musical - it's tonal and it's rhythmic and it follows an obvious song-like structure. Sure enough, a composer called Iain Chambers actually transcribed the recording into musical notation, which was then performed in the very space that the original recording was made in. Seriously, check it out - if you don't understand me when I talk about the inherent musicality of all sound, this recording of Tower Bridge may be what convinces you. I've put a link in the description below.

I planned for this episode to conclude with the entirety of my stroll across Tower Bridge, but on listening back I've decided against it. The results weren't particularly interesting - in fact, perhaps the only thing of interest is how uninteresting it is. It just sounds like I'm walking down a street; you wouldn't guess that there was tons of water powerfully coarsing beneath me. Also, the wind really started to pick up while I was half way across. Wind is the bane of field recordists; it makes this awful bassy buffeting noise that I can't stand. Technically, we do hear this wind noise in real life when it blows against our ears, but our brain knows to ignore that sound when it also feels the wind on our body. When you listen to a recording, your body doesn't also feel the wind so that sound isn't filtered out by your brain as the unnecessary noise that it is. Microphones don't discriminate. And anyway, this episode was getting a bit too long... so I'm just going to fade out here.