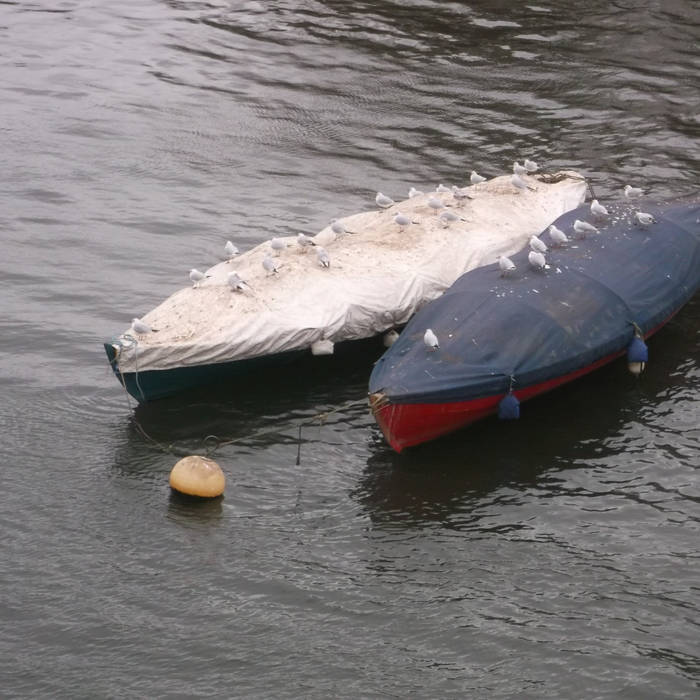 I'm sorry it's been over two months since the last episode but, you know, Christmas is a busy time of year and I've also had an important essay for my masters, yadda yadda yadda. I mentioned last episode that Field Trips is coming to a close; as such, I figured that since I've been covering a lot different areas of London; maybe it'd be good to represent the 'least-London place that is still technically London' that I could think of. So, I went to Richmond - a notably affluent part of town in the southwest. The town centre is not particularly remarkable. It sounds very much like any town centre: traffic, crosswalks, passers-by, there were several buskers about which I could have dedicated a whole episode to if I wanted to, but that wasn't really what I was hoping to focus on.

It's not too difficult to get away from this typical urban soundscape; it's only a couple minutes walk from the station to get to the river (which is really what defines Richmond as a town). It's a lot more serene by the water, even on the weekend and despite its allure to locals and tourists alike. It took a while to get here, but it's definitely actually Winter now which I've always thought was the worst time of year for field recording: For the most part it's a lot quieter - a lot less activity from people and wildlife alike. Even on the weekend noone was out on their boats here in Richmond, for example; I imagine in the summer the river is quite busy. It's also windier in general, and just not that pleasant to be outside for extended periods of time, I suppose.

After recording those pigeons I decided to just walk upstream and see what I find; I soon came across a large group of Italians - I think they're Italian, anyway - that were having some sort of party - sharing out snacks and wine in little plastic cups. The only two kids that were dragged along were entertaining themselves by tossing bread out into the air, hoping for the gulls to catch the pieces mid-flight. I'm thankful that the group weren't playing copyrighted pop music on a little portable radio or bluetooth speaker so that I could take a seat nearby and capture the ambience without worry. I find it interesting that the pigeons I recorded earlier were eventually kicked away one by one by a toddler (I had already stopped recording when that happened, typically), whereas these two boys were trying to encourage the gulls to get closer and closer. These two are a little older which might explain the contrast, but in both cases there's clearly a desire to interact with the animals - to have some sort of active affect on them.

A little further along the river you really start to feel like you're beginning to leave London and are now entering the countryside. All of a sudden these big expanses of green appear: woods and fields which - during the warmer months - hold cattle and other livestock. And though it might be a small detail, nothing lets you know that you're travelling through a rural place like a random small gate in the path. A group of revellers - all young, well dressed, pretty people - came across one of those metal ones that you have to pass through one at a time. The first two- a couple, obviously - kissed each other from either side of the gate and - in jest - their friends followed suit and a tradition was born. This is a recording that's really on that blurry ethical boundary; I really struggled to decide whether to use it for this episode or not but ultimately I opted for it because I thought it was funny (and also I admit I needed to flesh out the episode's length a bit). But, this one guy makes what might be considered a pretty crass joke that perhaps he'd be embarassed about were the wrong people to hear him make it. We also know his name and we can assume he's a resident of Richmond. Ultimately though I have so few listeners that I figured the chance of anyone identifying him on this recording is pretty much negligible.

Like a lot of areas of London - even the more pedestrianised and urban spaces - there are of course the green parakeets. Having walked at least half a mile away from the town centre I was able to record them without much background noise for the first time. I do happen to really like the sound of parakeets; they just seem so out of place. There's no other bird native to the UK that sounds quite like them (to my knowledge, at least). Their calls are so diverse - they squawk and chirp and purr and whistle - whenever I hear them it always feels a little less 'English' around or a little more exotic. Isn't that strange? I mean, obviously they aren't originally native to this country, but they pretty much are now! And yet they still seem somewhat out of place, like they'll never truly fit in. Maybe at some level they remind me of myself and the way my weird hybrid dialect means I've never felt any sort of strong national identity; I've always been defined by my peers from both sides of the pond as an 'other'.

After a while I noticed that the soundscape was getting quieter and quieter as I walked along the river bank. I had to turn back eventually, but I noticed a ferry service that takes you across the river so I thought I'd walk back on the other side rather than just retrace my steps. Richmond definitely has this small town feel: The buildings are old and charismatic, the streets are narrow and confusing to navigate at least for me, and everyone seems to know each other - or at least are friendlier to each other. There's even an old farming village nearby called Petersham which is about as 'home counties' as you can get, complete with muddy footpaths, crooked old buildings, and posh pub-restaurants where the patrons arrive in dirty wellies and equally dirty dogs.The fact that I didn't have to tap my oyster but instead paid with actual money added to the 'not really London' sense of place that I was already feeling. I wouldn't want to live around here (couldn't ever afford to even if I did!), but I have to admit that it's a nice change of pace for a Londoner like myself - a breath of fresh air both literally and figuratively.
I'm planning on making one more episode before calling it a day, but I don't know when I'll actually get around to it. Hell, it could be another two or three months! Just as an aside, I'm currently planning on shooting a short documentary on field recording as a musical genre, so if you are a field recordist yourself who releases albums, performs live with your recordings, and lives in the greater London area (or at least not too far away) then don't hesitate to get in touch if you want to be involved. Anyways, as always, thanks for listening.