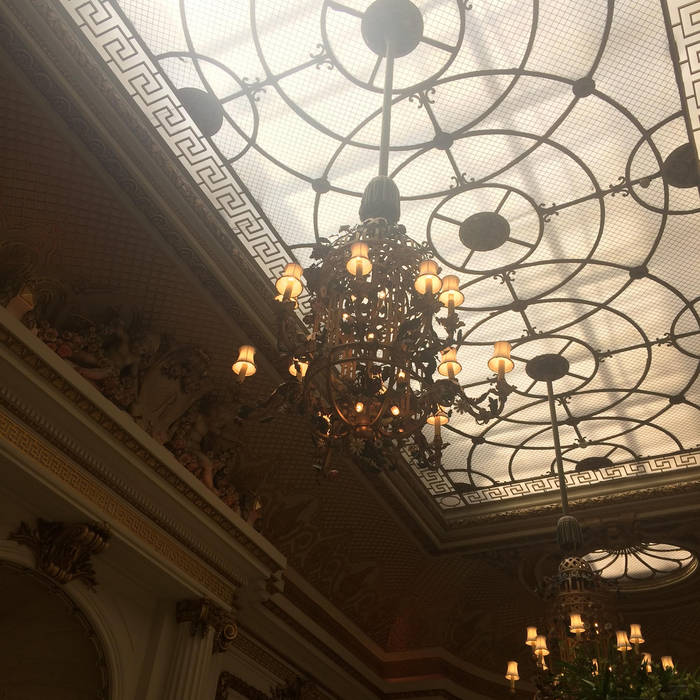 I had this idea to do a vlog channel about field recording, but it wasn't really for me: I found myself feeling very self-conscious with a camera, and I wasn't confident talking to the camera either. Plus, I don't think I have the charisma for impromptu commentary, so the idea for the project has evolved into what you're listening to now.

I've been recording sounds for a few years now. Originally I used my recordings in music, but over time I stopped feeling a need to appropriate them into that musical context. This activity has since become a passion of mine, but it's a passion that few of my peers are able to appreciate or understand. It's this disconnect that motivated me to produce this show, in which I hope to better explain what it is I actually do, though ultimately it's just a way for me to have a regular creative outlet.

This is the sound of afternoon tea at the Ritz. I would usually wear clothes that I've customised in order to hide recording equipment on my person but that wasn't going to meet the Ritz's dress code, so instead my equipment is contained within my messenger bag under the table. I was worried I might have to check my bag in or that it would be searched so I had also bought along a small handy recorder which was in my pocket, but the security at the Ritz is surprisingly lax.

In the two hours or so that I spent wandering Piccadilly I spotted three different buskers with accordions, each with a dog curled up in front of them. This accordionist was only playing a short loop of music, so I suppose she doesn't expect people to stop and listen for an extended period.

In case you didn't hear that, a passerby just commented that I was "too cheap to buy the CD".

The results of my trip along Piccadilly turned out to be almost entirely musical. That's not usually my focus, and it wasn't my intention when I set out - it's just that everywhere I went there was music. I walked into this church with a market outside hoping to get access to the bell tower, but it turned out there was a free performance by a saxophone quartet that day. I was not allowed in until the piece they were playing had finished, so this was recorded kind of in the lobby behind some glass doors - It still sounds quite nice. I like this transition as I leave.

I feel compelled to point out there's a lot more handling noise and clothes rustling in this recording than I would usually allow.It's because I was still in my suit which I had to wear for my afternoon tea at the Ritz and therefore the microphones are still strapped to my bag which is a lot noisier than the customised clothing I mentioned earlier. Future episodes hopefully won't have this problem, though perhaps it's only me who cares.

I'm now sat at Piccadilly Circus, just trying to get some nice urban ambience. But, after only a few minutes, more music: this time a busker with an electric guitar. Hopefully you can see what I mean when I say this first episode seemed destined to be musically focused.

Busking is pretty hit-or-miss for me, personally. I enjoy passing the occasional instrumentalist, but too often it's just someone singing a top 40 pop song with an acoustic guitar. It reminds me of Roger Scruton's idea of the "tyranny of pop music"; music is wonderful, but do we need it so goddamn always?

Ain't No Sunshine has always irritated me especially. I find the "I Know" verse particularly obnoxious, even though I'm really into minimalist music. I must say I much prefer this instrumental version, so perhaps the distinction is that I don't care for minimalist lyrics. But hey, despite my ranting I'm not a music critic, I just like to record sounds - so I should probably shut up get back to that.

I like how that horn was in tune with the solo .

On the other side of the fountain, there was a homeless guy singing through a traffic cone. I'm seeing this more and more nowadays; styles of begging seem to follow trends. You can hear that he is trying to sing along to Ain't No Sunshine but he's not doing that great a job. He's not in time or really in tune, and I absolutely love it. I can say with all sincerity that this is far and away my favourite rendition of Ain't No Sunshine that I've heard. It's rare you find an example of real folk music in the streets of central London.

I couldn't leave Piccadilly without recording what I would consider a soundmark of the street: Above Fortnum and Mason there is a clock that chimes regularly. On the hour it plays Westminster Quarters but one of the bells seems to be a little broken - it doesn't resonate as loudly or as clearly as the other bells - a subtle variation that I quite enjoyed. Two figurines emerge -presumably of the eponymous "Fortnum" and "Mason" - but don't really do anything: they just turn to each other and another tune plays. Aside from relentless motor traffic - this seems to be the one sonic constant of Piccadilly. So, on that, I'll let Mr. Fortnum and Mr. Mason play us out.