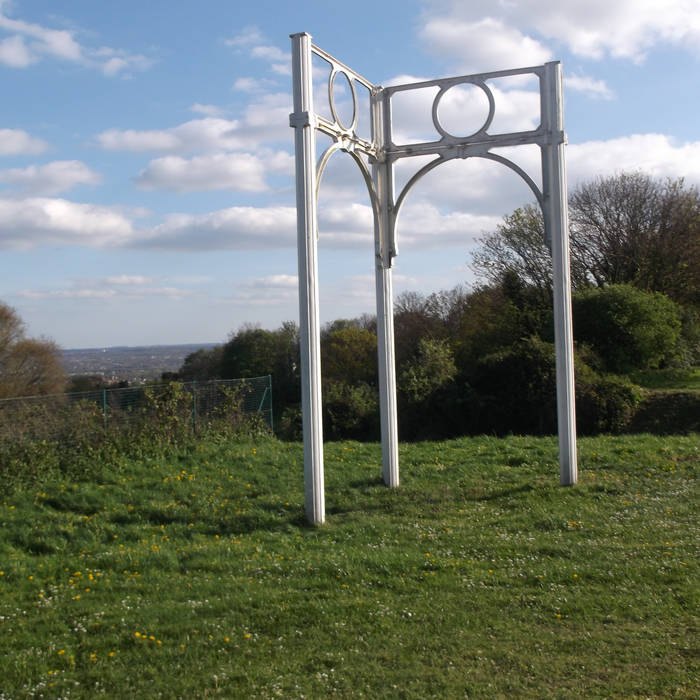 I went with a bit of a theme for this episode: Palaces! I visited three of them around Greater London, starting with Hampton Court - the courtyard of which you are hearing now.

That voice is coming from one of several barrels that line the centre path through the courtyard, an example of that increasingly common museum feature of augmented reality: manufactured ambience providing a sense of a place's past life to its present visitors. This particular barrel cum loudspeaker was perched atop a wooden slab which covered a hole in the floor with a sign explaining that it was under repair, so I don't think it was meant to be as loud as it was; the other barrels produced much quieter sounds. I like the contrast of fidelities here: the sound effects - heavily coloured by their own faulty concealment - fail at truly emerging the listener as it perhaps is meant to when played at a lower level, but listening back to my recording I found myself adjusting to that aesthetic - normalising it - before suddenly being jolted back to reality by the tolling of a bell - a particularly clear and detailed sonic event which illuminated the space I was occupying.

Hampton Court Palace has what they call a "magic garden" - and it is marvelous, like something out of Alice in Wonderland. Listening to all the sounds of this place was a delight - echoey thuds of metal tubular slides and other large-scale jungle gym features, rhythmic water fountains, steam machines, and squeaky water pumps, different kinds of surfaces being constantly sounded by the patter of children's feet - but recording it was a different matter. For all its fantastical splendour and sonic variety, the garden was simply too vast for me to succinctly capture from any one spot. To make matters even more difficult, I was in proper secret agent mode due to a lot of the children being naked and my not having a minor of my own to accompany. I must have looked weird just walking around by myself in my coat on a hot day and occaionally standing still for a few minutes at a time amidst a swarm of unclothed infants.

Some time later I visited the town of Eltham. Eltham is one of those deja-vu towns; it was my first time in the area but I really felt like I had been there a thousand times before. It just has nothing going for it to make it distinct or characterful except - I suppose - its palace, which stands out from others with its Art Deco interior design, but even that's a five minute walk from the high street (no offence by the way if you're from Eltham).

I was disappointed that I only managed to catch the 1 o'clock bell at Hampton Court so when I noticed this church on the way to the palace just before noon I thought I'd make a quick recording to make up for it. More bells = a better recording if you ask me.

The palace has a.. semi-moat? It doesn't go all the way around; perhaps it once did. At one point there's an artificial cascade which has a jet of water spurting out from the surface of the moat on one side of it and a metal plate in the ground emanating a ghostly drone on the other. Every so often the drone fades out and simultaneously the jet begins to shoot higher in the air, but as the drone comes back the jet sputters briefly before the cycle continues.

The two events were clearly connected, and sure enough at the top of the waterfall I found an explanation: the feature was supplied with water in volleys. The pumping wasn't regular, though - approximately every 30 seconds but sometimes as short as 20 or as long as 40 - so the process must rely on some physical variable rather than a clocked mechanism. Whatever, I just thought the whole thing was quite musical.

Inside the palace I found one hallway with particularly creaky floorboards. It reminded me of the Japanese uguisubari or "nightingale floors" which were deliberately designed to make a particular noise when walked on so as to warn occupants of nighttime intruders.

As I walked into this hallway for the first time I had an experience similar to that sudden contrast of fidelity at Hampton Court: Inside Eltham Palace it is particularly still and lifeless, and both the staff and the visitors speak in hushed tones, and then suddenly you pass through a doorframe and that quietude is upended by a single footstep. Rather than becoming aware of my surroundings though I instead became all too self-aware, like I was interjecting into something sacred.

Okay, I admit this last one is a bit of a copout, but it turned out all the other palaces of London I had either already visited in previous episodes, or are still in use as private residencies and not for public access, so I went to one of several that are no longer: specifically Crystal Palace. It was quiet - the weather wasn't that nice and it was a weekday - so I decided to make my own noise by feeding the waterfowl (don't worry, I didn't give them bread which apparently you're not supposed to do anymore; you can get a bag of proper birdfood for a quid). Throwing out the birdfood attracted more than just the local fowl though; any nearby children quickly gravitate towards the commotion with their parents in tow - this is not an activity you can enjoy in solitude.

I'm reminded of one of John Cage's anecdotes included in his textual spoken word piece 'Indeterminacy':

"Artists talk a lot about freedom. So, recalling the expression 'free as a bird', Morton Feldman went to a park one day and spent some time watching our feathered friends. When he came back, he said, 'You know? They're not free: They're fighting over bits of food.'"

Different kind of birds now, but just as noisy if not more so. At Crystal Palace Park there's a small urban farm/petting zoo near to the train station. This cage of budgies and parrakeets sound like when you fast-forward a cassette tape; their songs are both high pitched and fast-paced - it almost seems like if we could only slow them down we'd be privy to some hidden message... Spoiler: I tried it while editing this and it's still nonsense.

At the centre of the farm there's a large pen with several different kinds of animals living alongside each other including a pair of Toulouse geese who seemed strangely attracted to me. As I approached the pen they beelined towards me, stuck their long necks through the fence and started trying to nip at my clothes (I think maybe they could still smell the bird food I had used earlier and were expecting me to feed them). Anyway, something about me was definitely exciting them and they also started gnawing at the fence itself for some reason; I don't know what it was all about but it gave me a nice opportunity to record their vocalisations from up close.

I'm sorry it's been so long since the last episode. I've recently moved house and have also started my postgraduate studies, so I've been a bit busy preparing for and adjusting to those two changes in my life. Regrettably, right now I have neither the time nor the money to invest into this project the way I have been; everything's kind of uncertain right now for Field Trips. At most I'm likely to only produce a couple more episodes before calling it a day and focusing on my education (and even then, I don't know when I'll actually get around to doing those last couple episodes, so don't hold your breath).

So, just in case you don't hear from me for a while, I just wanted to say: Thankyou for listening.