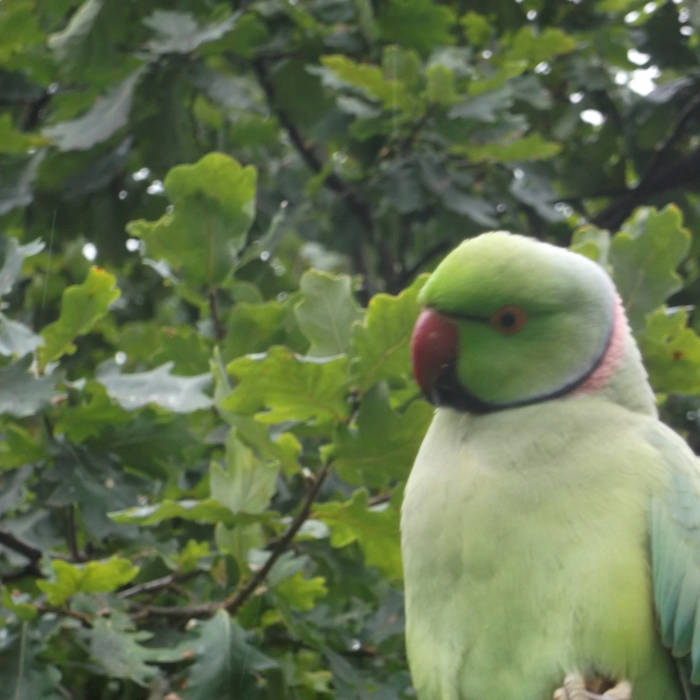 Hello, I am here; no, you're not accidentally listening to the sans-commentary version, there's just no part of that last recording that I could bring myself to speak over. I went to Hyde Park and it turned out BBC Proms was on (I had no idea). The performances hadn't started yet - everyone's just queuing up - and every couple of minutes an announcement like what you just heard was transmitted over some loudspeakers. As you could hear, these announcements aren't prerecorded or even from a script so there's a bit of clumsiness to it and they're having a bit of fun - you can even hear them smiling. What they didn't realise is that you could still hear them chatting away and making fun of each other when they weren't making an announcement - they left the microphone running. As nice as that was to hear, the first thing I needed to do was get away from the large enclosure so as to avoid bass-heavy copyrighted pop music from marring all of my recordings. First, I visited the "Diana, Princess of Wales Memorial Playground" which - according to a map at the entrance - had a "sound wall" (I wasn't allowed into the playground as I wasn't accompanying a child so I had to wander around the edge and listen for it from the other side of a bushy tree-lined perimeter).

This "sound wall" sounds like it's in fact multiple walls; right on the other side of the bushes you can hear the more prominent chimes, but there are other percussive bell instruments that are further away and in different directions from where I sat. There's also some sort of low xylophone that you can occasionally hear in the background. When listening to this place I can tell you that I can hear at least four distinct instruments, and voices from both children and adults alike, but I can't give you specifics. For example, the chimes seem to be struck not with mallets but rather via some sort of hammer mechanism as with each tone comes an accompanying clicky clacky sound, so this instrument seems surprisingly more akin to a piano in practice - but I can't be certain. Obvious comparisons can be made to the Sound Garden I recorded at the Horniman Museum in episode 2, but I can't describe this sonic playground to you in the same detail since - you know - I couldn't see it, and this one distinction of visibility (as well as perhaps physical distance) lent to a completely different listening experience for me, despite the similarities shared by the two locations.

A sound that you can not see the source of is described with the word "acousmatic" which was originally coined during the musique concrete movement to better distinguish it from more traditional music where the audience is privvy to the source of the sounds heard (the performers and their instruments). Since then its useage has expanded in sound studies to refer to any hidden sound, from nondiegetic sounds in films to electronic dance music. The problem with that original meaning of the word acousmatic is that even though you can't see the source of the sound it's still likely recognisable; traditional instruments have distinctive timbres, and we all know what a passing train sounds like, regardless of the context. For me, acousmatic listening is in its most distinctive - or at least consequential - form in situations like these where a real-life uncomposed sound is somehow veiled from the listener. It stimulates the imagination similarly to how you might visualise a scene when reading; you've been provided some information via text but your mind has to fill in the details. Because of this, sound as a medium can be empowered by taking advantage of our culture's tendency to prioritise sight; a recording inevitably makes you visualise a place, but rarely does an image evoke a sound the same way.

Alright, settle down there, Cecil Taylor! I like this recording for a lot of the same reasons that I liked the Horniman sound garden so I won't go into that, but there are some notable differences: The children themselves have less of a sonic presence here resulting in a more tranquil ambience, but that's somewhat countered by the increased background noise from both the surrounding greenery as well as the nearby inner-city traffic. One prominent similarity though is the relative popularity of the chimes. Yes, they are closer to where I was recording from, but you can hear that they are also played with more regularity compared to the other instruments. I wonder whether this is due to its sonority and tonal clarity or whether large tubular chimes hold some sort of visual aesthetic that attracts young children more than other instruments.

I've happened to explore Hyde Park a number of times before so I knew where the diversity of waterfowl like to relax when they're not begging the tourists for breadcrumbs. There are geese and swans and coots and moorhens, plus a few ducks and the occasional heron thrown in for good measure.

That sound to the right was a swan - right next to me - cleaning its feathers or something; don't think I've ever heard that before.

I really like this recording; it's just a lovely soundscape with a bunch of different things to hear and there's a fun little surprise at the end (no spoilers, though). I find that with most episodes of this project there's a variety in regards to the quality of the recordings. For example, episode 4 - which was centered around Trafalgar Square - had what I consider a great recording, that of the Biafran Demonstrators singing. But that episode started with a rather dull ambience - the usual humdrum droning murmer of the square. This show was never supposed to be exclusively about my successes but rather the process of field recording in its entirety, warts and all; but I have to say I'm really excited about this episode that you're listening to now. Hyde Park is a wonderful place to bring some microphones to.

Like Trafalgar Square - as with any other public space - there are signs dotted around telling you what not to, even though all those things are exactly why people are there in the first place. Here's the first example of that: "Keep dogs on leads at all times"...

I then went to see the "Diana, Princess of Wales Memorial... Fountain" this time rather than playground. Okay, this is going to be very difficult to describe: The fountain is not the kind of fountain you might be visualising. Rather, it's like a roughly circular manmade stream where the water flows in both directions at once, kind of? It's also not symmetrical - in fact, it's deliberatly designed to look as organic as possible with no repetition at any point. Even the floor under the water is uneven and bumpy but still safely navigable (again, according to the signs you're not actually supposed to walk in it, even though that is literally what everyone there is doing - kids and grownups alike. Even the warden I saw standing nearby didn't care).

As you walk around the fountain the sound of the water changes radically - one second it will be noisily coursing and with a single footstep it will start flowing smoothly and quietly.

I went to the bar for a quick break. It's a very busy place to the point that it's always difficult to actually get a table but I was in luck this time. There's a bunch of starlings hanging around, waiting for people to leave their table so that they might swoop down and plunder the leftovers. They're very messy as they do so - they knock over the teacups and glasses sometimes completely off the table.

Like I said, I was lucky: Not only did I manage to find a table to sit at, but while I was there the table next to me was vacated letting me record this opportunistic frenzy from up close.

The starlings don't have very long before a waitstaff inevitably shoos them away and clears the table.

The most popular activity at Hyde Park is feeding the wildlife (another no-no according to the signs - well, sort of: Some signs say not to whereas other only request that you feed the wildlife "responsibly"). Well, I wanted to record that but the question was how? I tried feeding squirrels some monkey nuts but they would just snatch my offering before scampering away. I tried feeding the waterfowl some bread, but the results weren't all that interesting. Finally, I found a group of people feeding the park's green parakeets - and I leave you today with the sound of one of these parakeets eating a slice of apple from my hand whilst perched on my wrist; it didn't seem to mind the microphone only inches from its face. You will probably need to be wearing headphones for this; even right up close it's a very quiet sound - listen for the the squelchy crunching in the middle of the stereo field.