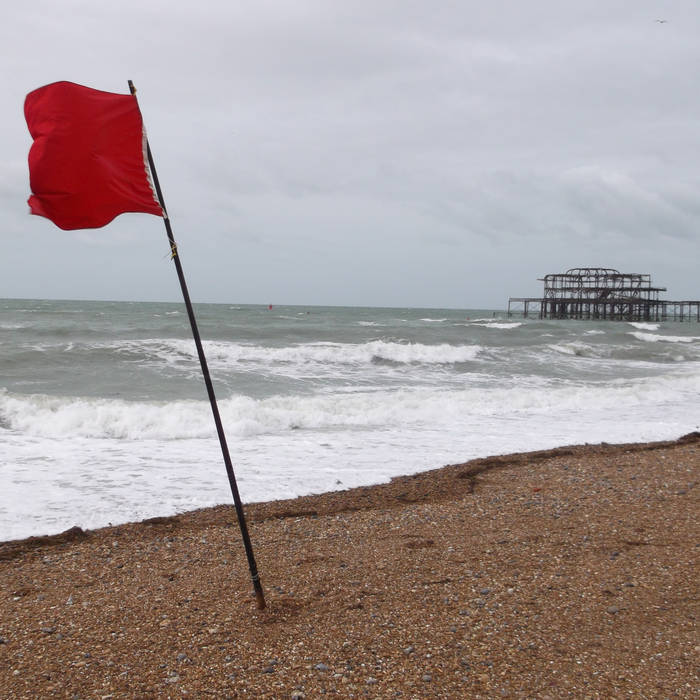 So, obviously this isn't London. Well, maybe there's some places along the Thames towards the East that might have similar sounding waves, but I don't know of any stone beaches down that way. I wanted to do something a little different for the last episode of this podcast to reflect the idea that I'm moving on to other things (I guess that's the art school graduate in me coming out), but I still wanted it to fit with the theme of the podcast so this was recorded in Brighton which is sometimes referred to as "London by the Sea". And Christ, It really is London by the Sea nowadays; I used to come down here quite regularly but it's been a good few years since I last visited and I was surprised by how it's changed.

Recordists love waves (no pun intended there); I check Radio Aporee almost every day (which - for those who aren't familiar - is a google maps based website dedicated to field recordings) and there's usually at least one wave recording uploaded that day. It's a sound that even normal, non-soundie people appreciate; according to some research white noise is relaxing at an almost evolutionary level, and the gentle rhythms produced by the waves is enough to put anyone at ease (hence its common usage in new-age music and relaxation apps). Personally I don't know if I find the sound all that relaxing but my grandfather happened to write a book consisting of anecdotes from life by the sea, my copy of which he inscribed with a message: "May the deep rhythms of the ocean resonate with the music of your soul", so this sound always reminds me of him and thus has a special place in my heart.

This was recorded early in the morning - about half past six - so that I could get the sound of the waves without much background noise of traffic and passers-by. Afterwards I killed some time drinking coffee and reading the paper before heading to the Pavillion as the sun began to shine and the town began to prosper.

The pavillion is often described as the "heart" of Brighton (well, by the local council and property developers, at least; I don't know what the locals make of it). It's an interesting place: An old palace with unusual, almost exotic architecture (for lack of a better word) with a small park to relax in. I picked a quiet spot to try to catch up on some sleep as I left my recorder to run.

A nearby bell tolling 10 o'clock let me know that the next spot on my field recording to-do list was now open: The arcade on Brighton's 'Palace Pier' - but I didn't feel the need to rush off immediately.
Seven years ago - which is when I first really started getting serious about field recording - I came to this arcade; back then I just had a humble zoom h4n which I casually whipped out as I walked in and I was immediately accosted by the security staff. They told me that no photography was allowed, and when I explained that I wasn't taking any pictures - only recording sound - they said it didn't matter: "No photography." I tried to explain further but they made it quite clear they didn't care and basically said I had to put my recorder away or leave. I never forgot that incident, and it's what led to me eventually exploring the discrete recording methods which are now my primary setup; I guess I've now got some small feeling of closure and comeuppance from this recording, no matter how petty it all might be.

The arcade extends surprisingly far along the pier once you're inside and there's so much going on that it's kind of overwhelming; I had no idea how I could best capture its soundscape. I figured it would be best to be somewhere near the middle and I supposed that I had to actually play one of the games so that I didn't look suspicious, but I couldn't record from too close to any particular machine or it's own individual noise would overwhelm the general ambience. I found a pair of coin-pusher games that were all but silent except for a steady sweeping sound from its mechanisms, so I left my equipment concealed within my bag which I placed on the floor between them while I wasted some money at another machine nearby. Since I came here shortly after the place opened there wasn't a huge number of visitors, but I reckon that was probably for the best; the machines are the interesting part of this place and, if anything, hordes of tourists would have only complicated the process and perhaps even distracted from the already cacophanous atmosphere.

Recording loud sounds is always a little weird - I had the same problem with the overhead jet planes of episode 10: It was incredibly loud but that might not come across to you - the listener - because you will only hear it as loud as you choose to play it (if that makes sense).
While I was in as the arcade I found myself playing "name that tune": For example, in this recording I can hear Drunken Sailor, the theme to the Twilight Zone, Cliff Richard's Summer Holiday, and - most prominently - Westminster Quarters. I find that last one quite apt as it brings me full circle back to the very first episode of this podcast when I recorded the same melody over at Piccadilly's Fortnum & Mason, and I can't think of a more suitable bookend for a show about the sounds of London. If you recognise any other tunes leave a comment AND WHILE YOURE AT IT MAKE SURE TO LIKE AND SMASH THAT SUBSCRIBE BUTTON oh wait I'm on soundcloud nevermind.

I wandered around town but didn't come across anything else that I found particularly compelling. I had arrived in Brighton the previous morning but the weather that day was absolutely miserable so I spent the day doing a bit of shopping and seeing a friend of mine who kindly put me up for the night (thanks again, Rosie and Charlie). As such, by this time I had had my fill of the town and decided to get back home to London proper.

Like waves, trains are a cliche recording subject whether it's at the station, along the tracks, or inside a train itself; it's also not uncommon when perusing through the weirder sections of second-hand record stores to find old vinyl of train recordings. I don't really have an understanding of why this is - I guess they just happen to make a diversity of cool sounds but people tend to get geeky about trains in general, regardless of their other hobbies so maybe just trains are awesome?

I love the city I live in, but it's important to get away from it once in a while. Likewise, I've enjoyed making this podcast for the last year but I think it's time to take a break from it and focus on other things. Maybe I'll return to it, maybe I won't - I promise nothing.